Roger Van Lanen named Umpire of the Year by WFSCA 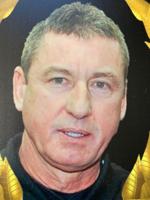 For the past number of years the Wisconsin Fastpitch Coaches Association has named an Umpire of the Year.

Roger has been around the fastpitch game for a lot of years and after ending his playing days he was talked into staying involved by a friend who was a longtime official in the Green Bay area. So at the age of 43 Roger embarked on a career in officiating.

He doesn't limit his officiating experiences to softball however. He also works baseball games but has cut back on the number of those while increasing the number of softball games he works. After COVID hit his former partner stopped working games and Roger's new partner only does softball. He figure that he worked 28-30 games this past season with many being doubleheaders due to all the "weathered-out" throughout the season.

Roger works a summer league and stays involved simply because he loves the game and enjoys staying involved. He played fastpitch for East Town Pub for quite a few years. "I enjoy the camaraderie and the friendships I have made through the game and now through officiating

Tag(s): Articles  Get the News