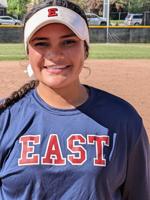 I was out in Utah last week visiting my son and a fastpitch game broke out between East High School in Salt Lake City and Northridge High out of Layton. The tournament out here started and here's how it works in Utah: the lower seeds play a one-game play-in into the Regional round that's a best-of-three. The winner of the Regional moves onto a Super Regional best-of-three against one of the top 8 seeds (the entire state field is seeded 1-33). The Super Regional winners advance to double-elimination bracket play, with both bracket winners advancing to a best-of-three championship series.

East led the series 1-0 after a 3-2 win on day 1 and on this day we arrived at the field with East leading 1-0 after 2 innings. I saw three good ballplayers in the game. Northridge had a good catcher with a good and a pretty good stick.  The East pitcher is a freshman with a nice lifter and a decent drop ball to go along with an excellent changeup. But the best player on the field that day was East's senior catcher, Maya Johnson, who according to MaxPreps currently has a .692 batting average (36x52) with 18 doubles, 1 triple, 5 five home runs and 35 RBI. She also has a strong arm, ball never went back to the backstop, and appears to be a true team leader.

Both Eric and I looked at each other in the fourth inning when Maya came up to bat with a runner on second and two outs and knew we'd each put her on first with a free pass. Northridge decided to pitch to her, and she hit a towering ball to deep right field for a double. East ended up winning the game 5-4.

Eric and I were very impressed with Maya. We learned that she has accepted an offer to attend school and play softball at Norfolk State University in Virginia next year.

I had a great chat with her after the game and after their dugout team chat.,

It was a great time at East's field. By the way -- Salt Lake East High school is the East High where High School musical was filmed.