This is Gayle's 27th year with the Program 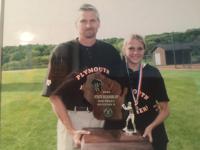 I’ve had a lot of great game stories over 26 years of coaching softball at Plymouth, but probably the most memorable game was the 2006 D2 State Semi-Final victory over HOF Coach Steve Schmikla and his McFarland squad. We were 21-1, with our only loss to Sparta, IL 4-3 in the season opener. McFarland came into the game 22-1.  It was billed as the ‘pitcher’s duel’ of the tournament.

Both Steve and I had our daughters for pitchers and both came in with spectacular numbers. For us, Lindsey Grahn had 203 strikeouts and an ERA of 0.32. McFarland’s ‘Stephanie Schmikla had 269 K’s and an ERA of 0.39.  As expected the first three innings were dominated by the hurlers, combining for 12 strikeouts. Then in the bottom of the 4th, we got our break. Katie Hanson blooped a single just over the third baseman’s head, just fair, with one out.  After a walk (Schmikla’s only of the game), Laura Rortvedt ripped a on- hop ground rule double to left center to make it 1-0. Alyssa Averill followed with an RBI groundout and we had a 2-0 lead.

That would stand up for the rest of the game. McFarland put two runners on in the fifth and one in the seventh, but could not get past second base. When Lindsey struck out the final hitter, her 12th of the game, we were on to the State Final.

Unfortunately, we came up short, losing in eight innings to Greendale, 4-3. In that game we trailed 3-1 going to the seventh, but a two run single by Hannah Bowe tied the game at 3-3. In the bottom of the eighth, All-State player Callie Givens led off with a triple then  scored the game winner an out later on a single by Karli Witkowski. Tough way to lose, but what a memorable two days in Madison, and we came home with a silver trophy.

Publisher's Note: Gale Grahan has been with the Plymouth softball program for 27 years including this year, he started the program at Plymouth with Paul Krzyzaniak, who has been his JV Coach/Assistant every year. he has been married to his wife Renae for 34 years. They have three children, Lindsey, Danielle, and Alex, and have four grandchildren, as well. He retired from teaching social studies at Plymouth two years ago, but he still substitute teaches a lot.  He has also coached football at Plymouth for 32 years, the last 13 as Offensive Coordinator.

Look for memorable games tomorrow from two more coaches. We have enough stories right now for 2 or three more days so keep them coming. Send them to faspich1@gmail.com