A Stalwart in the Dunn St. Croix since the school started softball, this is a key conference switch for the Eagles

From Lakers and Rivermen sprang The Eagles 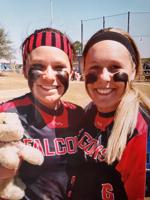 The Pepin/Alma Eagles’ softball team will be looking at a lot of strange faces in 2020 when they play their conference games. A longtime member of the Dunn/St. Croix Conference, the Eagles find themselves plopped into the Dairyland Conference this year.

“It surely will be an interesting year,” said Eagles Head Coach Matt Bellerive. “ There are so many unanswered questions we will be trying to handle. The loss of a four-year starting pitcher, a third sacker and a centerfielder, two of whom played in the WFSCA All Star games. We have some crucial spots, as if there are spots that aren’t crucial. We also have lost our starting second sacker from last year to suffered a shoulder injury during the volleyball season. She tried to let it fix itself but that didn’t happen so she recently had surgery.”

With all that being said Bellerive went on to say that he does have the starting shortstop returning in Kylie Brunner along with pitcher/1B Emma Brecka, outfielder Addison Olson and utility player Alyssa Kosidowski all whom were starters in 2019. Other Eagles’ players to watch include Brecka and fellow hurler Lydia Alme but Bellerive says that freshman Riley Necomb could move into some work in the circle as well.

The two schools merged their softball programs in 2012 and in doing so Bellerive stayed on as head coach. The schools both host practices and games so the Eagles have to home fields about 16 miles or so apart. Prior to 2012 and the start of the coop Pepin was a state small school power.

In 1986 Jim Haines began a run of highly successful seasons at Pepin High School. He stayed on through the 2005 season before leaving Pepin. In that time the Lakers won 12 conference championships in the Dunn/St. Croix Conference, a conference filled with many teams larger than Pepin and also included a very, very stout small school team in Elmwood. The Lakers didn’t stop at the conference championship level though. As a matter of fact they did much more. They claimed eight regional titles and five sectional titles that catapulted them into five Final Four appearances. Once there they continued the success by winning the state championship in 1995 and 1998 and took second place in 1999 and 2005. That 2005 runner-up finish should have an asterisk next to it as the winner of that state title game was a school located in a city of Wisconsin Rapids which could never be considered a small town when compared to the population of any of the teams in the Dunn/St. Croix Conference.

In 2005 Mel Westbrook and Matt Bellerive were the assistant coaches for the Lakers. When Haines left Westberg took over the reins of the Laker program. She stepped away after just one year at the helm and Bellerive took the reins and still pulls them as he leads a program that has continued to be respected. Including Matt’s three years as an assistant, two under the HOF coach and one under Westbrook he is now in his 17th season when the March 16th arrives. In that time his teams have won six conference titles and five regional titles. “I have not had a team step on that beautiful diamond in Madison yet,” he said. “We lost two sectional finals by one run. 2-1 in 2011 and 3-2 in 2013 shen we had what I believe was the toughest team in the history of Pepin softball. Losing a sectional final by one run is in my opinion, is the most excruciating way there is to lose and that one was in a most excruciating way. You feel like you have one foot on Goodman Diamond and the softball gods just come in and push you away.”

He went on to say, “ We will keep pushing along. As Bob says, just keep seeking better. We seek advice from great people who are proven winners. My thoughts are that it is extremely important to do so. I have reached out to collegiate coaches like Lesley Huntington at UW-Eau Claire and John Tschida at St. Thomas. I’ve chatted with coaches including Brian Phelps at Gilman, Don Bjelland at Grantsburg, Roger Schliewe at Horicon, Earl Gunderson the great former coach at Dave Bjorge at Arcadia, Jeff Hodgson at Belmont, Brad Ceranski who was at Thorp and now Fall Creek and of course Bob in Poynette. Of course I had the privilege of coaching under Jim Haines here in Pepin. He’s a Hall of Fame coach and taught me loads about this game.”

Since taking over the program as The Lakers, Bellerive has continued to move the program in positive directions. Having to meld girls from two communities together where those communities are not a consolidated district means having to walk a tight rope at times.

Surrounding oneself with great people who are filled with knowledge about the game and are eager to teach the game to young kids is always a key component of a successful program. Bellerive now has two former collegiate teammates assisting him. One is a former Pepin standout, Ali Murray an all-state competitor who went on to play at UW-River Falls. Her teammate from St. Anthony’s in the twin cities area is Aiyanna Ledwein who played outfield at UW-RF. Those two players bring a wealth of knowledge and experience to the program. Murray now also has one year of being a head basketball coach under her belt. Along with those two ladies Bellerive also welcomes longtime successful  Pepin football coach Mike Olson who also graduated from Pepin in 1987. “All three are excited to get going with this team this year,” said the head coach.

“We do not know much about the teams in the Dairyland Conference,” he quipped. “I do know that three-time conference champion and three-time Final Four Blair-Taylor looms huge there. Lauren Steien was 26-2 last year. That loss came in the Division 5 title game against Belmont. I bet she’s really eager and hungry. Who wouldn’t be after finishing runner-up twice and now it’s her final year.” Whew! That in itself makes them hands down the favorite in the conference. Then add in a great program at Independence-Gilmanton under head coach Chad Risler and Cochrane/Fountain City and coach Steve Lyga have a great program and have stepped foot on the dirt at Goodman Diamond as well. They’ve been there several times. We can’t look past anyone. There is also Eau Claire Immanuel and and up and coming Augusta program in the Dairyland Conference.”

The Badger state is filled with great, knowledgeable hardworking coaches. That long list includes Matt Bellerive. He has inserted plenty of energy with a newly formed coaching staff that are accustomed to success at every level they have played and worked.

The Eagles promise to soar high and be a force in the Dairyland Conference as well as anywhere they compete.