Program has won four conference titles, four regional titles and four sectional berths and been to the Sectional Final twice 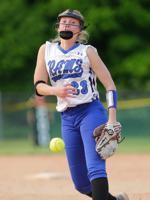 Chaise Arendt looking to lead Rams to higher peak in 2020

At Random Lake High School the sport didn't get underway for another 37 years. Thirty-seven!  It was finally added to the list of offered sports at Random Lake in 2013.

That's correct -- 2013. In the late 1980s the Random Lake school district was expanding its offerings for girls. They had two choices. It would either be soccer or softball. By the slimmest of margin in the vote soccer won out. Then again in the 90s there was another push to add fastpitch softball but it too failed.

In 2013 former Random Lake baseball player Mike LaFever after urging from the girls at Random Lake agreed to start the program. The rest truly is a story worth telling.

One might say that like the Phoenix, the Rams' softball program rose from the ashes. However, there never was a program to burn down so perhaps a better way to say it would be the Rams reached the pinnacle of fastpitch competition about as fast as a Dall sheep can scale a mountain top.

True, Random Lake has not quite reached the summit of Wisconsin high school fastpitch softball but just one step away from the Final Four in 2017 and again last season in the sectional final is all that separates LaFever and his charges from reaching the pinnacle of success - a Final Four Berth and a state title.

All five divisions in WIAA fastpitch softball are predicated on school enrollment. In Division 1 the top 112 schools in enrollment are placed there. The other four divisions all have either 80 or 81 teams. This season sees the Rams dropping down into the high end of Division 4 after having been in Division 3 since the program's inception. That means that in 2017 when they were beaten in the sectional final by eventual state champion Laconia, they were playing a team in the lower third of the division in terms of enrollment. In 2018 they ended Laconia’s season with a 7-5 win then beat former Division 2 school Campbellsport 5-2 before losing the sectional semi-final to Westfield, 7-0. Last season they met Campbellsport in the sectional final. The final score was 3-2. Campbellsport went on to beat Southern Door in the Final Four before losing the title game to Poynette. For a school in just its fifth year of existence to make a sectional final is saying a lot. To then play in the sectional semi the following year and follow it up in year seven with another sectional final berth really says it all for the Rams’ program. There are fastpitch programs within the WIAA that started up in the 1970s and 80s across the divisions that have never played in a sectional semi-final let alone four sectional berths and and two sectional final games.  Many have never won even a conference championship. Random Lake sports four of those.

Those things are a testament to the coaching staff that Random Lake's girls are fortunate to have. They are a hard-working staff that is constantly looking for ideas and methods to increase their efficiency as coaches and as a program. LaFever is joined on his staff by Roger Jones who is in his fourth year and Jason Harter who enters his second year within the program. Overall the Rams have amassed a record of 113-41 over the first  seven years with most of those losses coming in the first couple of years of getting the program up and running.

Originally in the Central Lakeshore conference, a seven-team conference, Random Lake won three conference titles in just its first seven years of providing the program to its girls. Now in the 11-team Big East they won the first-ever title in 2018 and finished just behind Mishicot last season.

When asked about the upcoming season LaFever stated that he is looking forward to a fun and competitive season. The Rams' starting pitcher returns as do seven other starters including a senior catcher. "I think they are hungry for more success," said the coach.

The Rams’ are coming off a 2019 season that saw them go 15-6. LaFever sees his team's strengths as experience and a will to get over the hump. "Our seniors, over the past three years have tasted defeat twice at the sectional final level," he added. "They have been willing to work and are willing to work harder still to get another chance to take that last step to the summit."

Returning in the circle will be three-time first team pitcher Chaise Arendt who was also named All District in 17, 18 and 19 and All State in 18 and 19. Catcher Jillian Becker returns as a second team all conference performer in 2019 while shortstop Emily Vorpahl returns as does right fielder Melanie Kritz who was an all conference player last season. At the hot corner LaFever welcomes back Madi Bichler and at the right-side corner is Sydney Wachs who was a starter her sophomore year at first base but had to sit out last season due to a torn ACL. Her loss set the Rams’ lineup back in 2019. Sophomores Calah Harter, who once hit two homers in the same game last season will be found at second base and in the circle. She was a second team all conference selection last season. Josey Mitchell will most likely roam the left side of the outfield. The coach says he has a very talented freshman and sophomore classes, "So we will see who rounds out the rest of the team.

When he peruses the Big East rosters and known returnees as well as the young talent entering the conference as 9th graders LaFever feels that his club will be in the mix to win the school's fifth conference title. He says the Rams will have to unseat Mishicot and will get strong competition from Howards Grove as well as Reedsville. "Hey, we can't take anybody for granted in this conference.

When he looks at the tournament series he says he will have to do some big time research. "I am a little lost for words right now when it comes to that time of the season," said LaFever. I just do not know much about the D4 level teams we are now listed with. What was once the regional level is filled with teams from the Big East and always tough Algoma. The rest present themselves as unknowns to me. The sectional looks to be very competitive. I know we are looking forward to hosting the sectional final right here in Random Lake."

With the seven-year success of the Rams' softball program one wonders how many conference titles and perhaps Final Four trips the school might have made if the vote back in the mid 80s had gone the other way and softball would have won out over soccer where that program has won no conference championships.